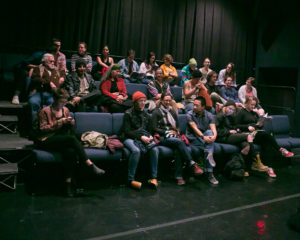 The next venue for the 8thTucson Fringe Festival is The Scoundrel & Scamp Theatre. This is the second year the Fringe has used S&S and it is an intimate space with all the needs a performer may desire. Currently in its second season since its grand opening, this 30-seat performance space is perfect for all our fringe-y needs. As the newest edition to the live performance community in Tucson, The Scoundrel & Scamp Theatre is already making waves. What’s the story behind this new space and how did it come to be?

The theatre space is the brainchild of two tech entrepreneurs, Bryan and Elizabeth Falcón. Not only did they start the new nonprofit theatre they also helped renovate the Zuzi Theatre space, a past fringe venue. Their goal is to help connect audiences to the human condition.

“Coming out of the election season in 2016, we began to see cultural narratives at war with each other. Given the current turn that technology has taken, it has been easy for us to fall into a siloed experience within the confines of social media. Within our silos, it has become more difficult to have real conversations with people with whom we disagree. As a non-profit committed to serving the people of Tucson, we aim to bring our local community together to share story as experience, and within that experience, share differing perspectives and world views.” ~ Falcon, Elizabeth. “Renovate the ZUZI! with the Scoundrel & Scamp Theatre!” Kickstarter, 2 Aug. 2017, www.kickstarter.com/projects/1648486007/renovate-the-zuzi-with-the-scoundrel-and-scamp-the. 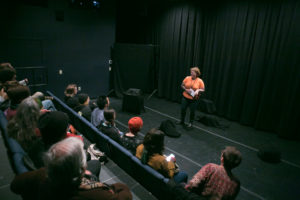 Their shows have gotten raving reviews from local critics and it’s clear they will continue creating some of the best live performance experiences in Tucson for many years. We at the Fringe are proud to have The Scoundrel & Scamp Theatre as a returning venue. We look forward to adding to their history as they add to our own.

This site uses Akismet to reduce spam. Learn how your comment data is processed.

Tucson Fringe Festival, Inc is a 501(c)3 Non-profit organization.
JOIN THE BOARD OF DIRECTORS - VOLUNTEER
Please take a moment and fill out this short demographic survey.
SURVEY